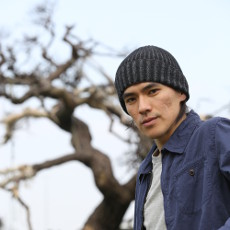 Choreographer and dancer. Born in 1983 in Taiwan.

As a choreographer, he is known for his thematic interest in the relationship between individual and society. As a dancer, he is known to possess unique dance vocabularies. Presented in the form of theater, site-specific performance or dance video, his creations in recent years often reflect how an individual or a group’s condition fluctuates in different social contexts, with consistent awareness and focus on the value of life. Based on years of choreography experience, he continues to seek enthusiastically new methods of creation, and potentials of cross-disciplinary collaboration using different mediums.

As a guest choreographer, commissioned by CCDC (Hong Kong), he has created Almost 55 for dancer Qiao Yang in 2019. In the same year he will also create a new piece for Beijing Dance/LDTX. These mark a new chapter, as he attempts to explore foreign culture and its values, by having dialogues with others and learning their personal, communal and national history.

His work Break & Break! was the winner of Performing Arts Award of the 17th Taishin Arts Award (Taiwan). His work 1875 Ravel and Bolero won the first prize of Global Dance Contest held by Sadler’s Wells Theatre (UK) in 2009. In the same year, Start with the Body won the bronze place of International Choreography Competition held by Cross Connection Ballet (Denmark).

Chou is also a producer. After establishing his company, Shu-Yi & Dancers, he has planned and produced the “Next Choreography Project” (2011~2014), an annual showcase platform for new choreographers, encouraging them to develop their esthetics as well as strengthening the relationship between the dance scene and the audience. He has also led the “Dance-Travel Project” (2011~2014), bringing his work to outdoor spaces and reaching out to more citizens with the beauty of dance. In response to the impact of COVID-19, he curated a three-day event, “Unfolding Futures – Body Motion Short Film Festival”, to introduce unique artists through images.

The repetition of musical theme reminds us of how our life is passing by and building up at the same time, and how is the meaning of life concealed within our gains, losses, joys and sorrows. Inspired by Bolero, Shu-Yi Chou has invited his fellow dancers to recollect personal experiences and individual reflections on urban life, incorporating them into this piece…more…

Shu-Yi Chou was the artist-in-residence at the Taipei Artist Village in the winter of 2007. It was his first art residency, and he chose to explore Taipei with his body. Afterwards, he embarked on a continuous dialogue with his surroundings. In subsequent works, he often responded to urban renewal and environmental changes. He also developed several works that have a symbiotic relationship with the performance/exhibition sites. For instance, the life exhibition series Break & Break was developed respectively for a former textile mill in Taipei (2018), an old shipyard in Macao (2020) and the ruins of a metal smelter in Jinguashi. In 2020, he also created After sea-level rise, I… on the rooftop of the National Kaohsiung Center for the Arts (Weiwuying).

Useless Action I is the first step taken by Chou for his return to the Taipei Artist Village, as he traces exhibited objects and visual narratives of his old works, he shares his perspective on what was once useful and is useless now. Through the impacts experienced from his journey and the imprints created, the intricately close relationship between art and social development is examined.

Shu-Yi Chou’s first dance video exhibition took place in Taipei’s Polymer Art Space which was a textile mill until the 1990s and has now been regenerated by artists who have brought new energy to it as an arts venue. He has chosen this venue as he would like to be part of this energy and to start a conversation with the redeveloped space…more…

Beyond the present predicament, look through the body under the lenses, through the window to tomorrow, to construct a dialogue with the future … Curated by Shu-Yi Chou, “Unfolding Futures” showcases 41 short films by artists from Taiwan, Hong Kong, China, Singapore and Malaysia .…more…

Every evening when nightfall approaches and the streetlight lights up, our clear vision will slowly sinks into the darkness. It is the moment we think of “light” – an element we often sense its presence without really feeling it. The flowing of light and shadow is like the transition between the Sun and the Moon, like “living,” and like all forms of life cycle. It involves a sense of “continuity,” to move on to the next date, to the next dinner, and to the next farewell. Even if it is just in our hearts, the city will again and again be lit up as well as lives – although we will stop.

The original version of About Living is a 30-minute short piece which premiered at the 2012 Hong Kong Arts Festival. Chou Shu-Yi soon brought out the idea to elaborate this piece into a longer solo version, expecting that the dialogue between the visual installation and the physical language as well as the dynamics of sounds can further explore the meaning through body.

In 2013, he invites the original team to continue deconstructing the essence of “light” and the shadow originated from light’s transition, creating an installation based on forms, weight, and a sense of space. He raises ten questions about living, discussing time, body, freedom, and other things we might experience in our lives. From the visible to the invisible, the obscure again turns clear. The bodies are moving in the light-and-shadow, attempting to offer a deeper meaning to life. The significance seems oppressive, but it is crystal clear and deeply rooted, creating various associations and emotions through different life experiences. It is a journey inviting us to pursue the shared experiences.

First Version Tour: May 2013 at Asian Cultural Council’s 50 Anniversary Celebration in New York and at Duri Dance Theatre in Seoul.

“The world Chou Shu-Yi leads us into is not an intellectual world which can be described by rational objectivity, but the sea of consciousness which only exists at the present moment and transforms at any second. No matter it is light, shadow, music, or dance, all these elements are elaborated as if they were raising questions. The separation in-between is like the punctuation of a poem. Repetitively, the dancers visualize their self-pursuit and exploration.”

Through the eyes of choreographer Chou Shu-yi, we are able to re-view and re-define this city.

With the concept deriving from the choreographer’s 2007 production, Visible City, People Filled with Air, this production continues the dialogues with the environment and moves the scene back to the city again. Employing brand new dancing vocabularies and mindsets close to the movement of the society, Chou Shu-yi collaborates with designers of the younger generation in building an “invisible architecture” and thus raises such questions as “In what way and what kind of speed are we living?” and “What sort of invisible power relations lie beneath the city?”

In face of turmoil in the society and the city, are we conscious or unconscious about the deaths and births of both the city and its people? Or are we striving to find the driving force behind our lives and trying to move on with freedom? Let’s see the changes between the city and us.

Changes of the city come from people’s endless longing for speed and height. The birth and rebirth of buildings constructs the appearance of the city as it is today. For generations after generations, those who have lived in the city leave behind their smell and temperament.

A city resembles a life with never-ceased changing, both visible and invisible.

In days of brightness and darkness, the city never stops shining, calling and searching.

One day, I was standing in the middle of a river. I don’t know how long those stones and water had paused there.
It was all transparent flow and invisible force.
Time helps us grow accustomed to speed. The things that fill our days keep coming as they repeat.
Life attempts to cut across time, continue and extend the instant for which we exist and our images and memories.
Listen. In five minutes another plane will fly overhead.
I cannot return to the past because it is sealed off by time. All of our pasts are sealed off and we can never return to them.

Reenactment was the first piece I choreographed for Shu-Yi & Dancers, which I established in 2011. It would be better to say that the museum chose me, rather than I chose to perform this piece at the museum. I considered how my body could fully impact, as well as coexist with, the museum during the performance.

Reenactment will be my second full-length outdoor performance (my 2007 environmental theater piece Visible City, People Filled with Air was the first), and with the space created by surrounding architecture and shifting sunlight as its themes, the work expresses the notions of history, memory and reflects upon the process of our existence. Time, once it passes, completes the process and can never be relived. We transformed the space around the museum into a performance venue, and after we started closely observing the space from different distances, angles, orientation and position, we discovered a way of coexisting with the space and the things within it. The atmosphere here was very slow; time seemed to stand still as we stood and watched. It was as if thousands of years were condensed in the atmosphere and enveloped our bodies as we perceived the enormity of flowing and revolving time. Under these conditions, what could our bodies possibly make happen? We ran into the museum, dancing among those pieces of history from daytime until after nightfall; the performance was just bodies and light.

One day is equal to a lifetime.

Exchanging each other’s daily experience and the observation of the environment. Adapting the texture discovered by the sense to develop unexpected comfort.

Truthfully describing all the things related to them in daily life, and create a straightforward sensibility in the translation and exchange of information, which allow us to re-construct and think about the state of existence of life.

Emptied Memories is the ongoing exploration into space and memory through theater andmoving image that director Chou, Tung-Yen has undertaken in recent years. In 2011-2012,under the sponsorship of Ministry of Culture, he invited the choreographer Chou, Shu-Yi to try to co-create an “empty space” by using “space” and “memory” as the core from which to start.

The creation employs the technological integration of panoramic video, real-time imageprocessing, sensors and wireless stage control system. The performer drives the externaldeformation of the material world, echoing the internal state, in order to present the organic flow of one’s mind landscape.